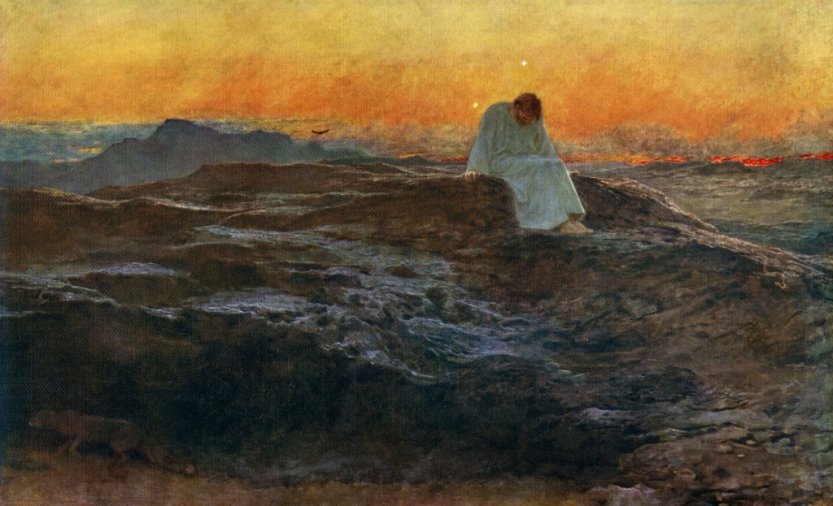 A sermon for the First Sunday of Lent, preached at the 5:30pm Saturday and 8am Sunday services

17 dead, a dozen injured, that is how we enter Lent this year. 17 dead, literally mowed down by an AR-15, the mass shooter’s weapon of choice, a semi-automatic assault rifle. A dozen injured, forever scarred, forever altered lives. Hundreds of students reliving the war zone that was created in the halls of their school, they were lucky enough to survive, but the trauma of this event is only beginning to unfold within them. This is how our Lenten season started this year. As Ash Wednesday progressed, news started to come out of another deadly school shooting with multiple fatalities. Thoughts and prayers were offered. The totality of violence however would not hit home until the following day when details began to emerge, 17 dead, including a football coach and security guard who gave his life shielding students from the bullets flying in the halls. A man being heralded as a hero. But, wouldn’t it be great if he had never had that opportunity?

Jesus is baptized today and then immediately driven into the wilderness to face Satan, to be tempted, to be put to the test. 40 days he is in the wilderness facing down Satan, facing down offers of power, of wealth, of invincibility, to be the hero. And Jesus refuses Satan at every turn.

It has been over 50 years since a sniper shot and killed 14 from a tower at the University of Texas. It has been 22 years since the first school shooting I had heard of took place in my hometown, when Barry Loukaitis shot and killed 3 people at Frontier Middle School, putting Moses Lake on the national news. I was only 9 when it happened, but I still remember my parents’ reactions, both of whom are teachers in that district, who knew the victims and families, who knew the officer who almost ended the life of the shooter, who knew the teacher who wrestled the gun away from him.

It has been 19 years since 13 were killed in Columbine before the lives of the shooters also ended from guns. I remember how that day brought up all of the memories of only 3 years prior in our town. It has been 11 years since 32 were killed at Virginia Tech before the shooter also succumbed to a gunshot. I remember how chilling it was to think that this could happen at a college, as I walked from class to class at Gonzaga, knowing that I had classmates who had guns with them in their cars, in their dorm rooms, in their houses. It has been just over 5 years since 27 were killed at Sandy Hook Elementary before the shooter succumbed to a gunshot. I remember how hard it was to reconcile this massacre with what I had begun to learn in seminary and how we as people of faith could, no, must respond.

It has been 5 months since one was killed and three injured at Freeman High School, in our own backyard. We had a vigil that night in this place, and prayed once more for victims of gun violence, only this time we knew them. It has been 4 months since the deadliest mass shooting on American soil in my lifetime, when a gunman in Las Vegas killed 58 and injured a further 851, before he too died of a gunshot, no motive, no reason ever uncovered. And it has been 5 days since Nikolas Cruz shot and killed 17 and injured a dozen more. And nothing has happened. Nothing has changed. Why?

When it comes to gun violence a lot of blame and categorization takes place. But these events, happening in our schools, happening in places where people should feel safe to congregate, continue to happen even though we say we don’t want them too. So, what gives?

We are in the wilderness in this country, as a society, our elected officials in particular, and we are taking every offer that Satan is giving us for power, wealth, invincibility, to be a “hero”. One of the first statements made by authorities following the arrest of the shooter was “Justice will be served.” Justice wouldn’t need to be served if we stopped the madness and did the real things to bring about change, things like actual gun control laws, re-sensitizing our society to violence, and universal health care to include mental health (although one’s mental health doesn’t really have that much to do with one’s propensity for violent crime) would all be good places to start.

But we won’t do these real things. Because we LOVE violence. We feed off of it. We hunger for it. We devour it and come up asking for more. More justice for those who perpetrate violence. More justice by taking this evil person’s life. Just look at the President’s response on twitter the day of the shooting saying the cops should’ve been called more on this shooter before he acted. Look at how the FBI is under scrutiny for not investigating a tip they received. Look at how mental health access is the “real problem” that will somehow miraculously fix everything, even though these guns with the high powered capacity to kill are being obtained legally with no red flags, not to mention the fact that those suffering mental illness are much more likely to be the victims of violent crime, not the perpetrators. We as a society crave justice to be done.  But, we can’t see justice served if there’s no opportunity to offend. We can’t feel powerful if we don’t have unfettered access to guns whose primary design and function is to kill human beings. We can’t be a hero, the “good guy with a gun,” if there isn’t also a “bad guy with a gun.”

It is this season of Lent in particular that brings home the failings of our society on this one issue specifically. It is in Lent that we prepare ourselves for a final story wherein the hunger for human sacrifice, for justice, is only satiated by the crucifixion and death of Jesus Christ. The question then is, how will we respond, how will we atone for our sins, for giving into the temptations of Satan, how will we finally leave the wilderness?

There are very real things that we must do. This is no longer something that we can simply pray for and ask forgiveness for our sins. If we don’t actively do something, then we are continuing to sin. My challenge to you to take on this Lent, is a Lenten observance and practice that atones for our own complicit acceptance of our society’s refusal to leave the wilderness, it’s to do whatever you can to enact real change, to bring an end to this ceaseless violence. Call, email, write, march, demand that our elected officials do whatever they can to end this madness. Support our own city council as they prepare to introduce an ordinance to place a special tax on certain gun purchases, earmarking money for mental health and wellness education, training, and access. And, wrestle with what I’m about to say.

Some will push back against this sermon today, I know that. It’s too political, and politics don’t belong in the pulpit, I get that. But, I want to push back and ask, is this actually a political issue? Sure political action is required to fix the problem, but shouldn’t the safety of our children, of all of us to congregate in public and feel safe, be a unifying topic and not something that further divides us? But maybe that’s not your concern, maybe you’re asking what does any of this have to do with Church?

We have our connection to Christ in baptism, which is reinforced in today’s gospel and the first letter of Peter. In the baptism of Christ we have God’s proclamation about Jesus’ true identity, “You are my Son, the Beloved; with you I am well pleased.” And it is in our connection to Christ through baptism that the salvific act of Christ carries real weight. We are brought into connection with God through Jesus’ death for our sins. We acknowledge this and take ownership of this connection when we receive our own baptism. Because, baptism is what saves us. We are not washed as a way of removing dirt from our bodies, but as an appeal to God for a good conscience. We are not washed to be made clean but rather to find wholeness, to take ownership for our manifold sins, to see our connection to Christ made real.

When God declares that he is well pleased with Jesus, it marks the final time that creation is deemed good. God created us, and it was good. Then we rebelled. So God sent the flood, saving eight people, and because our creation is good, the promise of God’s covenant with Noah still stands in the sky today. God delivered the Hebrews from the land of Egypt through Moses, and while they too had to wander in the wilderness, God fulfilled his promise to lead them into the promised land. But that wasn’t enough for us. Finally God sent his only Son, declared him good, and by proxy declared once more that creation was good. And yet we still hungered for our own sense of justice. We still hungered for violence to be done. We still hungered for human sacrifice to feed our temptations. And so we killed Jesus. Yet, even in this act, we could not escape the overabundance of love and forgiveness that flows from God. Because of this, we baptise ourselves to reconnect to God, through our connection to Christ, to try and find once more the creation that God deemed good.

So, shouldn’t we, as Christians, as faithful people, take on this particular political hot topic?